Celebrating Pride in the Autism Community 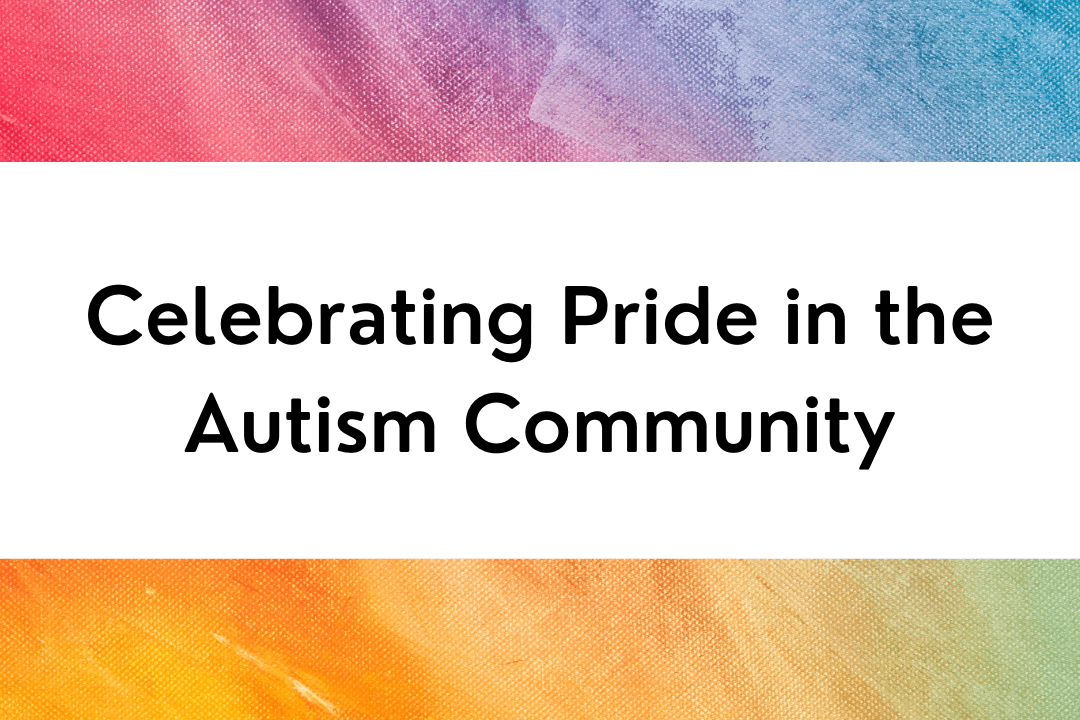 In June, people around the world celebrate Pride month. Here at AuSM, we’re taking this month to focus on the intersections of autism and the LGBTQIA community. This intersection has come into focus recently as research reveals that there is significant overlap between the two communities.

A recent study found that between 15 and 35 percent of autistics who do not have an intellectual disability are gay, lesbian, or bisexual, in comparison with approximately 5 percent of the general population (Pecora, Mesibov, and Stokes). In addition, autistic individuals report more gender-dysphoric traits than neurotypical controls (George and Stokes). Individuals who are not cisgender are three to six times more likely to be autistic than cisgender individuals (Warrier et. al.). Together, these statistics indicate that any community that seeks to support and welcome autistic individuals must understand gender and sexual diversity as well.

“I think about the overlap between neurodiversity and queerness a lot,” Samm Knight said. “I think, for both populations, there is a common thread of secret alienation that can shape how we engage with the world.”

That alienation has a major impact on autistic and queer individuals. Both communities are at risk of bullying, so those with a dual identity are even more vulnerable.

M., a lesbian woman, notes, “Bullying has been a huge downside and it’s hard having both autism and a marginalized sexuality. When I started puberty, I thought everyone thought women were attractive, and I had zero concept of what a lesbian was. I would outwardly state that a girl was attractive because I didn’t understand that it wasn’t ‘normal.’ This led to unrelenting teasing and ostracizing. I tried so hard to fit in but then eventually gave up and was a loner.”

Some autistic individuals also struggle with the perception that individuals with disabilities cannot or do not date or have sex.

Zoey, a trans woman who speaks through supported communication, expressed her frustration that her sexual identity is not seen as valid. “People say you can’t date when you are autistic, but I think that is wrong.”

Jane Carlson of the Melisa Nellesen Center for Autism at Utah Valley University said, “The assumption used to be that many, many people on the spectrum were asexual, that they didn’t identify as sexual beings. We thought it was related to their social deficits – that they didn’t want to be in relationships, it just wasn’t a thing for people with autism. Now we know it is really related to difficulty navigating the situation.”

Autistics may want to date but simply not know how. An added difficulty is that many queer spaces are not accessible to autistics. “The LGBTQ community doesn’t come with many spaces that are accessible, especially from a sensory standpoint,” said Jillian Nelson, Community Resource and Policy Advocate at the Autism Society of Minnesota (AuSM). “Many gatherings are fueled with alcohol, loud music, and social ambiguity. I am proud to be a part of things like our LGBT support group at AuSM and the Escape Space at the Pride festival that offer some intersectional intentionality to queer spaces. But it’s far from true inclusion. Being autistic in queer spaces hasn’t always been the easiest: the queer community often is unforgiving.”

When you add in gender identity, things become even more confusing. Having a diagnosis of autism can affect an individual’s ability to receive appropriate gender-affirming services and supports.

Some community members share that they have struggled to find a doctor who will support their gender transition due to judgments about autism. People both in and out of the medical field often assume that an autistic individual is not capable of determining their own gender identity or want to “treat” the autism before they allow an individual to receive gender affirming services. Forcing an individual to wait for gender affirmation can cause significant distress and dysphoria and severely impact quality of life.

Other autistics may experience gender differently than neurotypicals. X. shared: “When other people describe the feeling of ‘knowing’ that they’re a man or a woman or nonbinary, I have no idea what they mean. I know that I experience the world as an autistic, and that is my primary identifier. I understand what I mean when I say autistic. But if I call myself a woman, what am I telling people? I’m not giving them information about my physical body, the way I dress, the way I act, or the way I think. What else is it? I call myself agender because I simply don’t want to participate in gender, which is a construct that doesn’t make sense.”

Autistics also may come to their gender and sexual identities in different ways and at different times than neurotypical people. “It didn’t occur to me to ask if I was attracted to women until later in life because I also was attracted to men,” X. said. “All the scripts I had been given told me that attraction to men meant I was straight.”

Other community members may find it hard to fit in with typical straight culture. M. notes, “Being autistic makes it hard for me to hide things and hiding my sexuality is difficult. I strive to be authentic.”

These factors make it important for caregivers and support staff of autistics to be educated in LGBTQIA issues.

Knight said, “I’m non-binary, asexual, invisibly disabled, and autistic. Unless I try really hard to signal with my appearance, these are all minority statuses that go unseen. People assume I’m ‘normal,’ and that puts me in a box filled with assumptions and expectations that don’t work for me. I’ve grated up against a society that isn’t made for people like me in a lot of ways—coworkers wanting to socialize at loud bars, doctors not taking my symptoms seriously, family misgendering my partner constantly.”

Those who aren’t living in the intersection of autism and queerness have a powerful way to support this dual-identified community, to learn about the invisible struggles and become allies. For allies, caregivers, and support people, one of the strongest signs of support is creating a space for autistic queers to belong. Creating autism-friendly spaces means creating LGBTQIA-friendly spaces.

Nelson said, “Autistic queers live in the gray space in both communities. The disability community isn’t always the most LGBT friendly, and the LGBT community still isn’t fully accessible. It can feel like standing on the edge in both places. However, as we see the co-occurrence grow, my hope for the future is that both spaces embrace the intersectionality so we can truly belong.”

X. notes, “When people around me correct someone who misgenders me or uses the incorrect name, it tells me that they are on my side and willing to go to bat for me. Even though I’ve just experienced something uncomfortable or painful, when an ally steps up and speaks out about the problem it takes the sting out of it.”

How to be an autistic and LGBTQIA ally:

We have a long way to go before we truly understand the connection between the LGBTQIA community and autism. But what we do know is that when autistic LGBTQIA individuals are supported and loved for who they are, they flourish.

M. said, “[I] wouldn’t trade any of my traits to be typical and fit in. I have found my people and they accept me as I am. And I’m proud of who I am!”