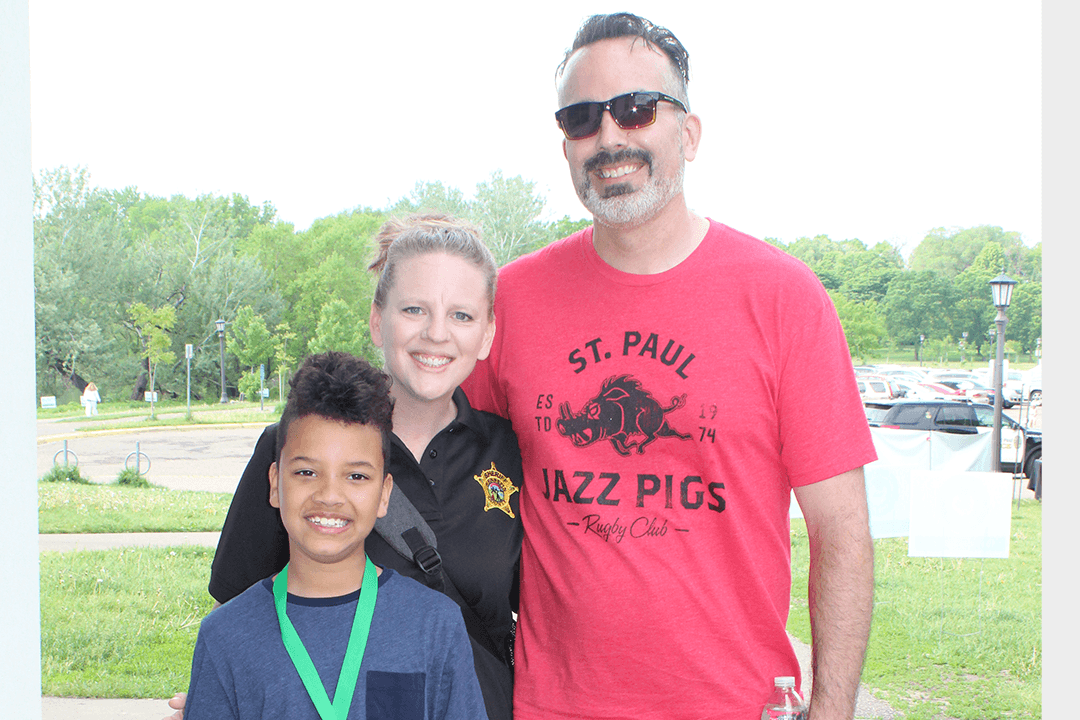 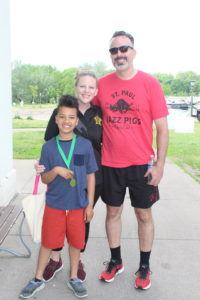 Family love fosters a bond that transcends challenges, defies expectations, and builds resilience. Megan Braun and her husband, Doug, learned that this love, combined with community support, is what brings joy to each day.

BUILDING A FAMILY
A couple who met while playing rugby at the University of North Dakota, Megan and Doug moved to Minneapolis after college and got married. They were eager to have children, yet struggled with fertility. Adoption was a logical option.

“We wanted to have the opportunity to give a child a home – so many children need loving homes, and we were ready,” Megan said.

Lutheran Social Services (LSS) connected them with a birth mother who planned to place her baby for adoption, but then changed her mind. Megan and Doug felt defeated after that; however, Megan’s cousin, who worked for LSS, encouraged them to set up a Facebook page about wanting to adopt. Shortly after building the page, they connected with a birth mother who was due in two months in Tacoma, Washington.

They Facetimed with the birth mother throughout her pregnancy, learning about her and watching the growth of their little one. Two weeks before the baby’s due date, Megan and Doug went to Target to purchase things needed to prepare for and welcome the baby.

Babies arrive when they’re ready, and Megan and Doug’s son came a bit early, requiring them to book emergency flights to Tacoma to be there for the birth. Donovan Edwin was born on June 13, 2013.

The family stayed in Tacoma for a week while the adoption paperwork was processed and then ultimately returned to Minnesota with their son.

“We got home and were finally a family,” Megan said.

DONOVAN’S DIAGNOSIS
As babies do, Donovan grew quickly from infant to toddler, meeting milestones and thriving in the deep love from his parents and extended family.

At age 3, while Donovan was in a home daycare, a parent of another child, who was a special ed teacher, noticed that Donovan made minimal eye contact and was a runner. She alerted Megan and her husband that these are characteristics of autism. Not well-versed in autism, yet understanding that early intervention could be important, Megan set up an appointment for Donovan at Children’s Hospital.

Megan remembers that her husband couldn’t go to the appointment and calling Doug to tell him that Donovan had autism.

Overwhelmed by the diagnosis, thousands of results in searches of “autism” online, and the length of waiting lists for services recommended by Children’s Hospital, Megan felt paralyzed. She felt Donovan’s autism was somehow her fault as a mom and couldn’t understand why this was happening to her family.

In her despair, Megan called the Autism Society of Minnesota (AuSM), a resource she found in an Internet search for “autism support.”

“I think I said two words before starting to cry,” Megan said. “The person who answered the phone – Jillian – said, ‘It’s OK, we’re here to do this together.’ She didn’t give me a sales pitch or try to sign me up for an appointment. She asked me to tell her what I need. Suddenly, I didn’t feel alone.”

Jillian, an AuSM Information and Resources specialist, told Megan that just because her son has been diagnosed with autism doesn’t mean he won’t accomplish anything in life. “I know because I have autism,” she said.

In that moment, Megan realized she and Doug needed to be encouraging parents and that having a core community of support would be essential.

“I was lost until I called AuSM,” Megan said. “With their support, I felt like I could finally breathe.”

Doug was relieved by Megan’s relief. He noted that an autism diagnosis didn’t make any difference – that they love Donovan no matter what.

GROWING WITH DONOVAN
Donovan began therapy at the Helena Autism Therapy Center, where his therapist, Josh, taught Megan and Doug how to work with Donovan, incorporating therapies that would help support Donovan at home. At age 5, Donovan went to a charter school, a stay that lasted only three days. Megan notes, “Mama bear came out.” She knew it wasn’t the right place for her son.

Donovan switched to Palmer Lake Elementary, a public school in Brooklyn Park, which was a new beginning. The school staff became his advocates, especially the special education teachers. “He has grown leaps and bounds because of them,” Megan said.

Donovan’s energy, ability to see the good in everyone, and love for his interests and people have helped Megan and Doug grow, too. Donovan, who wants to be a deputy sheriff when he grows up, is obsessed with trains and loves video games, science, cooking, and pizza night Fridays. It wouldn’t be unusual to see Donovan creating his own cooking show video with the Hamilton soundtrack as background music or experimenting with Coca Cola and Mentos while cracking jokes with his dad.

“Who cares about messes?” Megan muses. “They’re all cleanable, and it’s most important to make those memories!”

Understanding what to expect through visual daily activity charts and having choices have been key to building Donovan’s self-reliance and independence.

To make new friends, Donovan recently joined Darby’s Dancers, a studio that includes dancers of all abilities. He dances for fun and participates in competitions, an activity that boosts his confidence. Through the studio, Megan and Doug also have connected with other parents with whom they share resources.

Meeting other families and learning about available programs and services has made a huge difference in their lives. Megan, Doug, and Donovan have attended the Autism Society of Minnesota’s Steps for Autism walk and resource fair since Donovan was diagnosed.

“We don’t have to navigate this diagnosis alone,” Megan said. She notes that it’s OK to feel sad or be angry or feel lost. Receiving help and support can change that outlook. “An autism diagnosis will change you as a parent, but in a positive way. You’ll see the world through your child’s eyes. Donovan sees things differently and brilliantly. I wouldn’t change him for the world.”