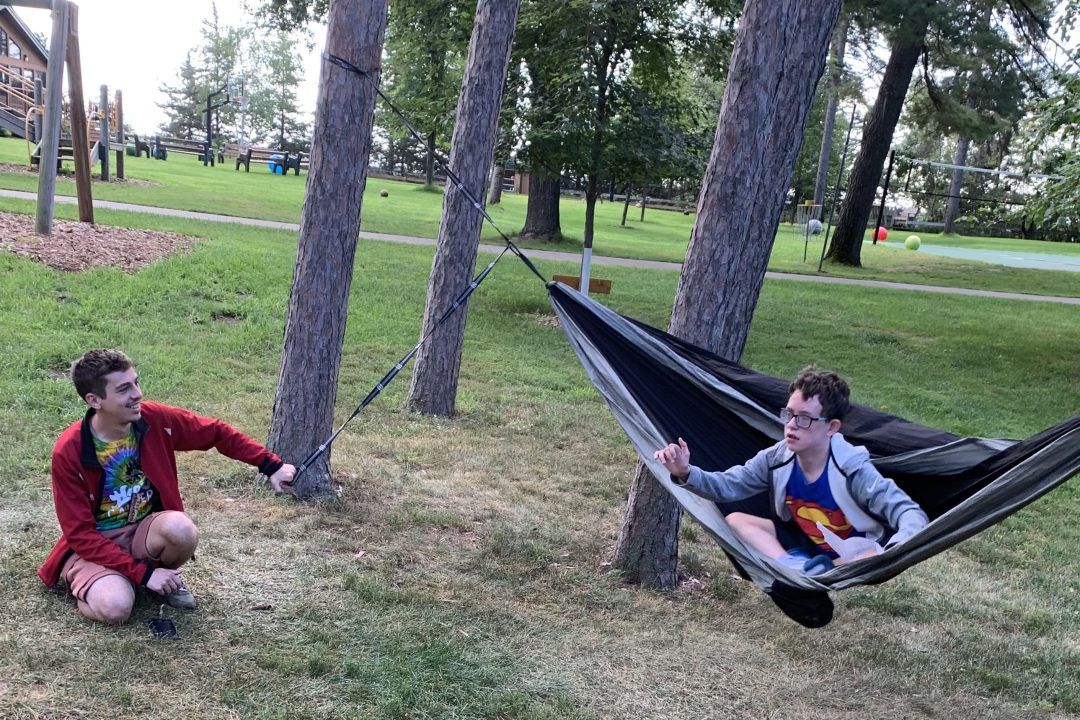 Jackson is a nonverbal autistic child who in the summer of 2022 became a first-time camper – which also marked the first time he’s been away from family for multiple days. To gather Jackson’s success story, AuSM spoke to his mother, Amber Bluhm, about overcoming her and her husband’s reservations about sending him away overnight. We also spoke with camp staff who worked closely with Jackson’s family to help him have a positive camp experience. Lucas LaFostecasse was in his fourth year camp as a counselor at Hand in Hand, and outside of camp he’s an improv teacher working with autistic kids at Stages Theater. Kristy Anderson is a middle school special education teacher whose career is well informed by her 16 years as program staff at Camp Hand In Hand.

Amber: “If we tell Jackson, ‘We’re going to drop you off at camp and you’re not going to see us for five days, and you’re not going to know any of these people – are you going to be OK? What are your feelings about this?’ We don’t get an answer from him. So that was our biggest reservation – we didn’t know what he’d think of it. He’d spent the night with relatives, but never this type of situation. We wanted to start with a day camp, but coming out of COVID nobody was doing that. AuSM said if we could be flexible about overnighting, they’d put his name in the lottery for Camp Hand In Hand. It just so happened my in-laws live near camp, and I could stay there and pick Jackson up every evening.”

Kristy: “Jackson’s parents were worried about him spending the night, so we came in with the goal of preparing him to stay at least the last night.”

Amber: “Hand In Hand has a one-on-one camper/staff ratio, and I don’t know if we’d otherwise do it. Everyone at camp was very well organized in their process. I was impressed. We’d filled out the long questionnaire of all of Jackson’s needs and likes. As soon as we arrived, they said, ‘Oh yes, Jackson, he’s with Lucas,’ and gave me a lot of info about this counselor, including that he has a sibling with autism.” 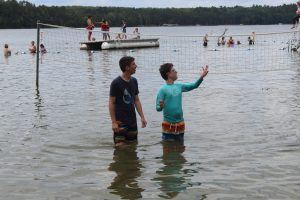 Lucas: “My goal is always to study each camper to see what accommodations they might need. I did a lot of social narrating with Jackson, including about staying overnight. You never want to blindside a camper – always make sure they understand the plan.”

Amber: “Then I drive up to the next station at check-in, where they already know all about his food preferences, and I drive to the next station and the nurse is already familiar with his needs. They all just got it. As soon as I said ‘Jackson’ they knew his story. They’d been through his file. If you’re the parent of a kid with special needs, when you go to a doctor appointment, by the time the doc sees you you’ve told the receptionist his story, then nurses. It’s needed, but it’s exhausting. I thought I’d again tell his life story four times, but everyone at camp already knew it. It made me feel comfortable that they all took the time and gave Jackson so much thought.”

Kristy: “In the daytime, Jackson was able to get into his bunk at relaxation time, so we could tell he was comfortable. Lucas noticed Jackson enjoyed the pressure of being pushed in the hammock and continued to make sure he got that sensation in different ways.”

Lucas: “Kristy specializes in working with nonverbal kids. She’s a phenomenal resource for us and a valuable coach to our entire team. I’ve learned a lot of different strategies from her over the last few summers.”

Kristy: “People can think nonverbal people aren’t saying anything because there are no words, but that just isn’t true. They are communicating, you just have to pay attention to what they’re saying with their bodies and their sounds. I just really enjoy the challenge of getting to know them in that way because it tells you a lot about them.”

Lucas: “I learned with Jackson. He showed me he wanted to sensory seek, pushing his proprioceptive and vestibular senses while hanging out in hammocks, with me pushing and pulling as hard as I could, keeping him engaged. Same reaction on the fast motion of boat rides.” 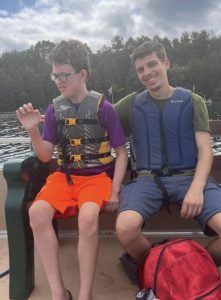 Amber: “They were very encouraging and wanted, if Jackson was ready for more independence, for him to spend the night. I was not opposed to that at all but just needed to make sure he was comfortable – that was my main goal. Jackson’s an outdoor guy. He loves playing in the woods, breaking sticks, throwing rocks, swimming, so he was excited about all that. He basically didn’t say goodbye at drop-off, like, this is what I’m doing today.”

Lucas: “We were seeing that Jackson transitioned easily into naps, indicating a comfort level that led me to recommend that staying over was a safe risk to consider. He didn’t seem tohave any problems, was finding safe places, and appreciated having his own safety-food snacks at quiet time.”

Kristy: “It was a big step for him just to get used to knowing he had a bunk. “

Amber: “Lucas gave us updates that Jackson likes to go from activity to activity. He said he knows when Jackson’s done and wants to do something else, but also that he’s not trying to leave.”

Lucas: “It’s clear what he doesn’t want or like – an adamant ‘no’ is indicated by arm push motion and grunt. It was also clear he enjoyed exploring trails, snapping sticks in half and throwing them. He loved the firefighters’ visit on water night, watching their hoses and flashing lights. When he didn’t participate in some activities, he still enjoyed seeing other campers do them.”

Kristy: “Lucas really paid attention to Jackson’s facial features and his sounds, understanding that without words he’s still saying something.”

Lucas: “We lean on our camp staff and fellow counselors, surrounded by a giant library of knowledge and experience. You get to have that sense of community and contribute to it all at once in this very fluid cycle, and that’s something I love about camp that I try to bring into other interactions and work I do in the neurodiverse community. Camp is one of the only places where you can show unfiltered care and accommodations for people who need it, and I greatly value that.” 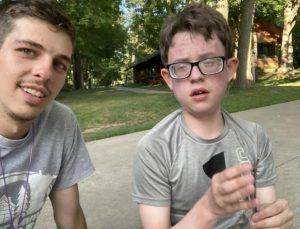 Amber: “On the third day, Lucas said, ‘You’ve already been here to drop him off and pick him up, so he knows where that meeting place, away from other campers, is – he’s not trying to go to that space.’ He was eating all the food we brought, which was something I was worried about. And he likes tohave some down time for cartoons on his tablet, and they allowed for that. I didn’t know how he’d sleep overnight, but I was 15 minutes away and said I didn’t care if they called at 2 in the morning. My husband agreed. So, I didn’t come that third night, and didn’t get a phone call and didn’t see him for the last couple days. We were getting updates and pictures on the Facebook group I’d signed up for, saw he was smiling and having fun, and I knew they would call if needed.”

Lucas: “It was about showing up for Jackson and his family, and finding ways for him to enjoy himself at camp. Camp’s training directors cultivate a feeling of allowing yourself to become a vessel for what someone else needs. An unconditional version of care – they cultivate that in everybody, and I’ve not seen it anywhere outside of camp.”

Amber: I think the new experiences were good for him. He did a great job. He gained independence. We’ll definitely sign him up next year and get in the lottery. Jackson was on a horse, and he’d never even seen a horse. He loved the boating. He loves to swing, so he loved the hammocks. It helped that he had a buddy who would push him in a hammock all day. To have Lucas push him, as much and as long as Jackson wanted – who wouldn’t want someone personally doing that for you?” 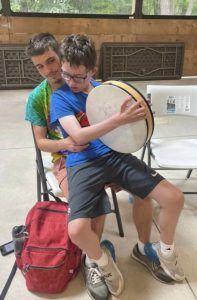 Kristy: “I’m so glad Jackson was able to get the experience of staying overnight, and enjoying it. Camp definitely inspired me to become a special ed teacher. It’s their place, for campers just to be them and not worry about the norms of school systems. And camp has helped me better understand everyone – including all the kids at the school where I teach.”

Lucas: “Kristy was 100% very strong webbing and scaffolding for my campers – just a phenomenal person.And we’ve shown there are flexible ways to do camp, for a kid who’s never spent a night away from family.”

Kristy: “Camp is where I go every summer to re-set. I like that it’s a place where everyone who goes there gets a chance to be themselves with no judgement from the outside world. I really do enjoy working with nonverbals like Jackson, and the challenge I enjoy is the fact that you have to pay such close attention to their nonverbal cues to meet their needs.”

Amber: “I’m super impressed with the camp. They got it, and that’s something that worries special needs parent – will they have it together? We mostly don’t know what Jackson thinks and that’s hard for mom and dad, especially with his situation, but I think we all gained some independence and knowledge. I’m so proud of him and think he did awesome. I really feel like he enjoyed it.”

Lucas: “Having something outside of home that Jackson can look forward to is a big win for him and his family.”

Amber: “I saw him take on something and wasn’t sure how it would go, but he was open to it. Gaining a sense of independence is great for these kids – independence from mom and dad, and even from grandma and grandpa, with completely different people. Someday, when he’s not with family, he could end up in a group home situation, if we feel like that’s the best place for him. This camp experience starts structuring that independence that he’s going to need more and more as he gets older. So overall, that’s what we took away from camp as parents. And he took away self-confidence from camp, too.”